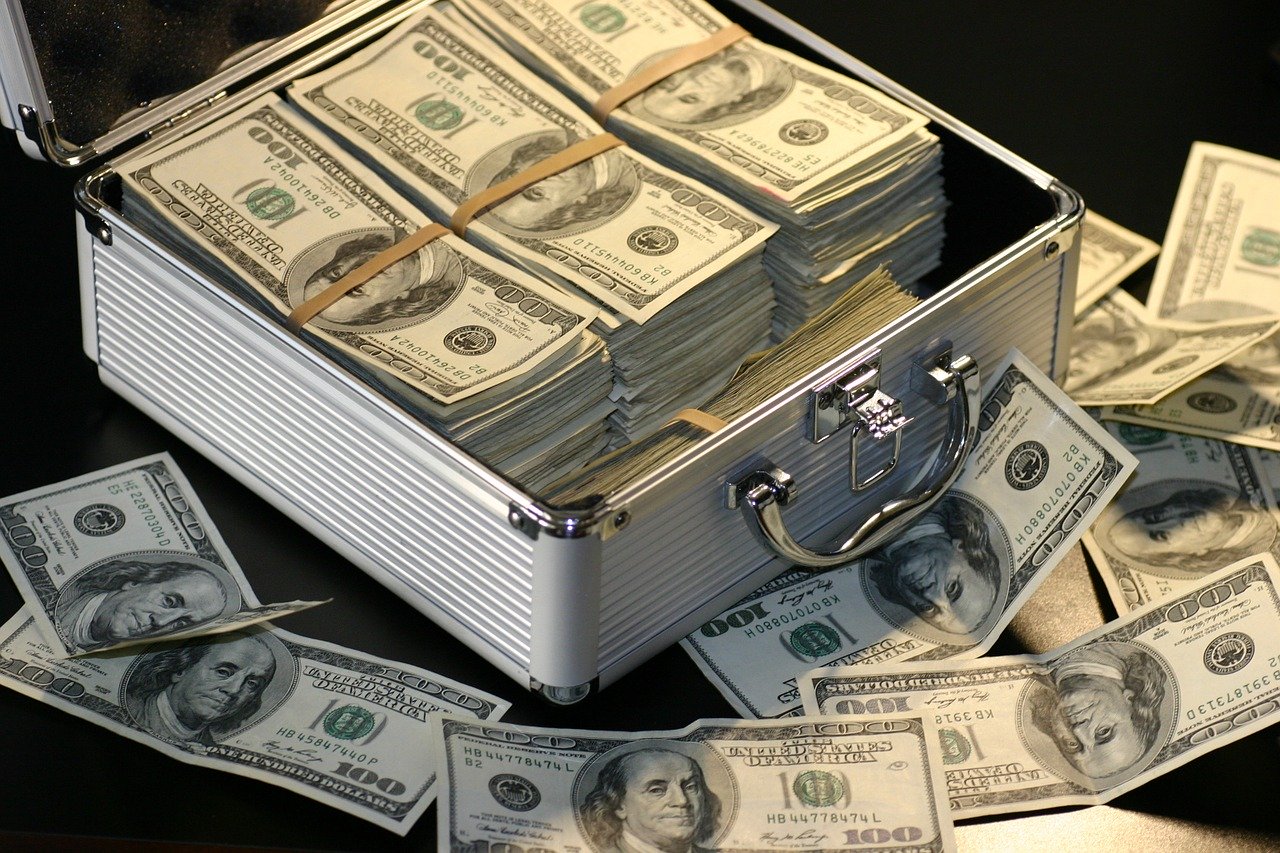 The topic of money has been discussed throughout the ages, yet one axiom remains constant: we always want more (of it). There’s no denying that it plays an important part in our lives; and just how much, you’ll see in our money statistics soon enough.  After all, having excess amounts of money allows you to lead a fairly easy and comfortable life where you can afford both necessities and luxuries.

As such, this article will introduce you to some general facts about money and how standards of living differ depending on your location, occupation, and more.

If you want to become part of that 1%, read carefully.

It’s not uncommon for teachers in the US to have a second non-school related job during summer in order to improve their personal finances. In fact, it’s not just summer jobs — it’s a year-round occurrence.

One of the most indicative money facts portraying the US economy is that 15% of all adults share the same burden, though the percentage of those with student loan debt declines with age.

22% of those aged 30–44 have student loan debt, whereas merely 7% of those between 45 and 59 do so. An astounding 1% of those over 60 still have outstanding debts from their student days; unbelievable.

3. Even though wages are higher than what they were 40 years ago, their purchasing power hasn’t changed much.

The rise of wages in the US has been consistent since 1964, but that hasn’t altered the position of workers by much. What solidifies this as scary financial statistics is the fact that the average wage of $4.03 per hour in 1973 holds the same purchasing power as the average wage of $23.68 in 2018.

Retail salespersons also made it on the list with $24,200, as did customer service representatives with an annual wage of just $33,750. Interestingly enough, these occupations also counted the most employees. The same facts about US money indicate 2.5% of the population worked as cashiers, 3.4% as retail salespersons, and 1.8% as customer service representatives.

5. Urban areas are (naturally) more expensive than rural ones.

Likewise, coastal areas are just as expensive as urban ones. The price of living varies greatly, depending mostly on the state you live in, as well as the county. For instance, the latest financing statistics show that El Centro is 42.3% less expensive than Silicon Valley, even though they are both in California.

6. Over the ages, a bachelor’s degree (or higher) is the only diploma that saw an increase in earnings.

If we look at this across the generations, the silent generation had median annual earnings of $51,500 with a bachelor’s degree when they were young adults, compared to the millenials’ $56,000.

It seems the US economy is only helping the rich, much to the distress of the other classes.

58% of Americans said the economy was hurting the middle class, and another 64% said the same thing for the poor. Lastly, 46% said they felt that the current economy was also hurting them and their families.

8. 44% of low-income Americans worry about having enough money to pay the bills on a daily basis.

According to the average US household money statistics, uncertainty isn’t so high for the middle class; merely 19% worry about the same thing. Just 7% of high-income Americans share the same worries.

9. Merely 29% of all American adults say they live comfortably.

This figure just goes to show that the class gap is growing ever wider.

According to these financial statistics, 72% of those with a higher income believe they live comfortably, whereas this number decreases to just 28% for those with a middle income, and further down to 8% for low-income families.

Speaking of which, 17% of low-income households state they don’t even have enough for basic expenses, whereas only a small number of middle- and upper-class households said the same, 3% and 2% respectively.

10. However, 63% of all Americans believe they’ll live comfortably in the future.

In fact, 84% of those belonging to the upper class believe so. Things are more optimistic for the middle and lower class too, as 68% and 56% (respectively) expect a more comfortable life in the future.

Furthermore, the global domestic equity market capitalization is valued at $93.33 trillion. The value for the same market in the Asia Pacific region equals $25.92 trillion.

12. The US dollar has a 60.89% share of global foreign exchange reserves, recent money statistics reveal.

What’s more, $11.83 trillion is the value of the global currency reserves.

Now, when it comes to the daily turnover on the global Forex market, we get to another $6.6 trillion. Finally, the monthly exchange rate of the US dollar to the Russian ruble is 71.05 RUB (at the time of writing).

13. Mexican money facts: the value of international reserves and foreign currency liquidity in this country in 2019 was 187.99 billion US dollars.

In addition, the broad money supply — money that could be easily convertible to cash (mostly from bank and savings accounts) — was also through the roof at 198.65 trillion yuan. The amount of “narrow money” — in other words, cash — was significantly lower; around 7.72 trillion yuan to be exact.

Canadian money facts reveal that USA’s Northern neighbors are significantly lower on the list with a market share of only 2.7%; in turn, sharing 6th place on the global stock market along with Switzerland, which also holds 2.7%.

A country’s bank reserve can say a lot about its economy. In US dollars, China had saved up an impressive $8.51 billion. Yet, perhaps the most impressive figure is its gold reserves from the same year — 59.56 million ounces.

17. Ryan Kaji earned 26 million dollars in 2019, placing him number 1 on Forbes’ highest-paid YouTubers for that year.

Starting from a young age with unboxing videos, Kaji soon moved on to creating his own merch, getting a deal with Hulu, and landing a Nickelodeon show. He also branched out to doing interesting science experiments on his channel.

What makes him even more impressive is that he’s only 8 years old. YouTube money stats put Dude Perfect in second place with 20 million dollars for 2019, and Anastasia Radzinskaya in third place with 18 million.

The average Amazon worker makes $28,466 annually. Meaning, Bezos makes around 160 times more in just one hour. Alice Walton (Walmart) and Mark Zuckerberg (Facebook) are right behind Bezos on the highest-paid billionaire list as they also make over a million bucks an hour.

To put things into perspective, his total net worth is 1,795,575 times bigger than the average median US household income. What’s more, with a net worth that huge, he could buy 64.7 million troy ounces of gold.

In fact, the number is so impressive that he accounts for 1.90% of the total wealth of the richest people on the planet.

20. More fun facts about money: Elon Musk went from a net worth of $680 million to 2 billion in just a span of a year by investing in risky industries.

Despite most people failing in the electric car, solar power, and space rocket industries, Musk is actually thriving and climbing the social ladder at the speed of light (figuratively speaking).

His company, Tesla Motors, increased its stocks by 30% in a little over a year. SolarCity, a company which he owns a fourth of, got an institutional funding round of $81 million. Finally, SpaceX, which he owns two-thirds of, is also thriving and racking up billions.

21. Pablo Escobar money facts: his Cartel brought him a whopping $430 million a week.

This is largely due to the fact that he held a monopoly over the entire cocaine market, with some 80% being under his direct control. Reportedly, he smuggled over 15 tons of cocaine into the States each day.

Hence, due to his successful criminal empire, his net worth equaled to around $30 billion by the mid-’80s. In fact, he even earned a spot on Forbes’ list of the richest people on Earth.

Hopefully, these money statistics helped shed some new light on exactly how money fits into the whole story. Attitudes towards money vary depending on where you live and who you are as a person, but the one thing you have to keep in mind is that you can’t let it control you.

The best (and hardest) thing to do is to make it work for you, not the other way around as, although essential, it’s not the most important thing in life.

24 Key Customer Service Statistics You Should Know in 2020